Some of you that know my background understand that I worked in the Newspaper Industry for over a decade. Some of my greatest accomplishments were in the industry, both professionally and technically. It truly saddens me that newspapers are fading… but I don’t think it’s a death, it’s really a suicide.

விளம்பரங்கள் நடந்து செல்லும்போது செய்தித்தாள்கள் பார்த்தன ஈபே மற்றும் கிரெய்க்லிஸ்ட். Arrogantly, they didn’t think to take some of their profits and invest in online auctions or classifieds. The amazing thing about this is that they held the ultimate card – geography. Had newspapers found a way to tap online classifieds into a regional solution, I think they could have held out. It’s too late now… every successful online classified system has a regional component to it.

If their publishers would stop pulling loads of AP crap, their Editors stopped editing, they stopped letting go of local talent, and they started to let their reporters run free. In other words – if they stopped being stupid about about enforcing ‘the bottom line’ and utilized the talent they have, I would be there for them.

ஆதாரம்? அப்படியே படியுங்கள் Ruth Holloday’s blog when you get the chance. I worked at the local newspaper for a few years, read the paper every day, and never really knew Ruth. But for the last year I’ve been reading her blog and it blows me away. Her integrity, honesty, bluntness, and absolute passion to get to the story is something I never recognized when she wrote for the Star. In fact, I didn’t even know who she was at the Star!

I had a boss and mentor, Skip Warren, a long time ago. He said that employees would always surprise you if you gave them the opportunity to be successful. This is no different with newspapers. Monster corporations, politics, and middle management have destroyed the newspaper. Ruth’s blog will continue to build momentum… and anyone with a news reader will find these ex-newspaper journalists and begin reading their blogs!

Ruth doesn’t have an advertising budget to try to keep her on top like the Star does, but no worries – I think the Star’s site will kill enough of its internal talent that will push people to more informative sites like Ruth’s! I’ve heard from insiders that the areas of growth in the Star’s site have really centered around user-generated content, niche (local) news, and blogging. Huh! Imagine that! 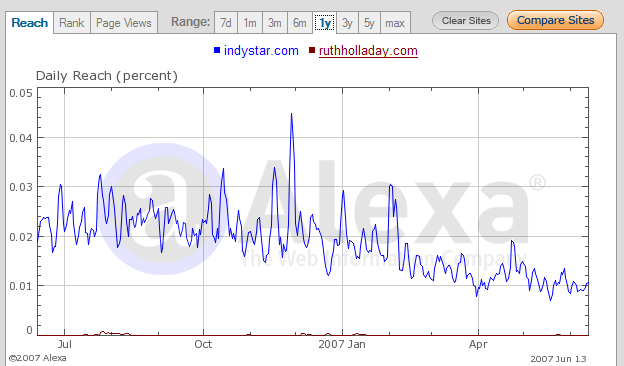