This month we’re kicking off some posts on mobile devices. Understanding the technology that is being adopted is important for marketers to understand. Mobile Internet growth is accelerating much faster than anyone had expected. One example: searches of Chrysler during the Super Bowl surged 48 times over the normal volume of desktop queries, but search on mobile was 102 முறை. கோடாடி இயல்பை விட 38 மடங்கு அதிக கேள்விகளைக் கண்டது, மொபைல் இருந்தது 315 முறை.

Devices like Verizon’s HTC Thunderbolt are paving the way for this growth. This is a spectacular Android phone. After testing it for a month, I fell in love with it so much that I went and bought the upgrade. I had to have it. The phone is both beautiful… and HUGE. Some folks may find it too big… my thumb can barely slide across the enormous screen. Side by side with an iPhone 4, the iPhone just appears puny… and the materials don’t even feel as impressive. Like the iPhone 4, the Thunderbolt is also fitted with a second camera.

குறிப்பு: I did purchase an iPhone 4 for my daughter (no, she didn’t want a Thunderbolt) so I could shift her back to Verizon. AT&T coverage and billing was terrible. I’m going to save a few bucks, have a single family bill again, and get better coverage without the calls dropping.

I had worked with the Droid Pro for the last year or so and loved it, but my fat fingers struggled with the keyboard. Surprisingly, the visual keyboard on the Thunderbolt is larger than the physical keyboard on the Droid Pro. I can type much easier – especially when I turn it horizontal! After looking back and forth between screens the last month… I just couldn’t put down the Thunderbolt. 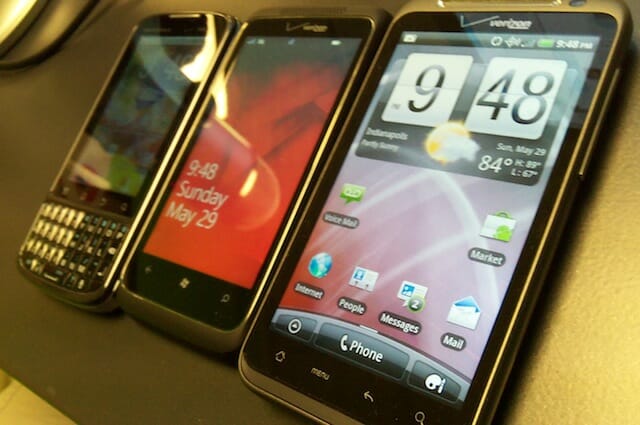 I was also able to test the HTC Trophy, a Windows Phone 7 device. Don’t discount Windows Phone 7… the user interface isn’t just elegant, it’s much easier to navigate than the iPhone or Android in my opinion. While agencies and techies like me won’t move to Windows Phone 7, the enterprise Exchange market is a huge one. I showed it to a gentleman on the flight with me down to Atlanta and he said he couldn’t wait to ditch is Blackberry for one. Time will tell – but I hardly think that Microsoft is out of the race any time soon since they own corporate email.

Unfortunately, I don’t think the HTC Trophy’s hardware is up to par with the operating system. The camera downright stinks. In the photo to the left, you’ll see the Thunderbolt (8 Megapixel) photo to the left, Trophy (5 Megapixel) to the right. For video, the Thunderbolt records at 720 HD… so I can finally do away with keeping a handheld video camera with me wherever I go. One unique design feature is a bracket on the back that pulls out to stand the phone upright… cool idea! It was my nighttime clock beside my bed last night.

The only complaint I’ve heard about the Thunderbolt is the battery life. I don’t really care, though. I always travel with a spare USB battery and charger. I simply can’t stop staring at the screen. I’m curious if this new wave of cameras is the end for the iPhone. The Android and Windows Phone 7 Operating Systems are both superior, and these new devices are getting better every single day.